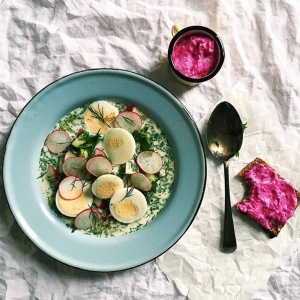 The lack of courage and self-confidence are definitely the things a lot of us are familiar with, myself included. Having adored cooking and hosting dinner parties for the nearest and dearest ones, it took me ages to pluck up the courage to start cooking for the people I don’t know (not to mention the people who are paying money for my food). Starting KinoVino was a really magical moment as through this project I have found the perfect outlet for the more confident film curator and the very shy cook in me. After a year of working with some of the most incredible, talented and intoxicatingly inspiring chefs in the KinoVino kitchen, I have learnt a whole lot of invaluable practical skills and most importantly that it’s fine to take risk and sometimes just go with it! And with it I went, when my dear friends form Brighton’s Cafe Noor asked me to curate and cook a meal for their upcoming Russian-themed supper club. Having already helped out on a similar one dedicated to Georgian cuisine and music, I knew that the format works so well: people are treated to a feast of national dishes with each course being punctuated by a session of folk songs performed by a choir.

Hailing from Russia, I have never been the biggest fan of my national cuisine, always drawn to the Mediterranean shores or the Middle Eastern spices instead. But this was a good time to re-connect with my culinary heritage and of course to think how I could re-interpret it a little to reflect my own cooking style and taste. The challenge was on and I could not have been more inspired or excited to have take it. This was my 6th collaboration with the lovely couple of Cafe Noor, so I knew we were in (each other’s) safe hands. I chose a menu of true Russian classics (after all, taking a risk is a great thing up to a point) which included a twist on a traditional ‘bread and salt’ welcome nibble, a quint-essential summer soup ‘okroshka’, two types of buckwheat kasha, and an amalgamation of my two favourite childhood deserts, which resulted in an apricot tvorog stuffed blintzes.
~

~
The night was a real delight, filled with lots of vodka shots and singing, both from the choir and our merry diners, with just the necessary dose of the crazy service adrenaline. So that’s the thing about lack of courage – it does feel incredibly rewarding once you manage to overcome it! Oh, and did I mention that we ended up feeding 50 people?
~ 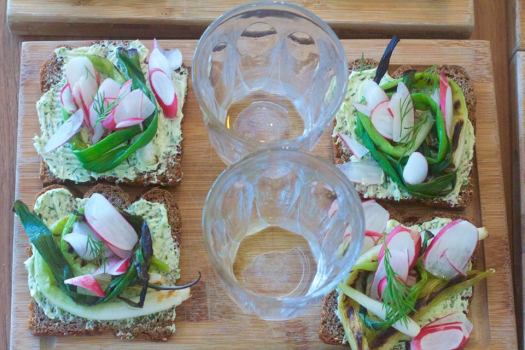 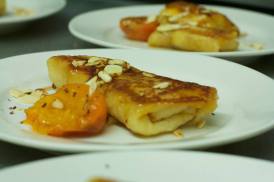 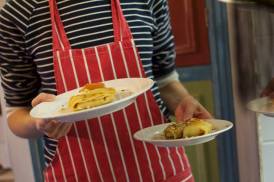 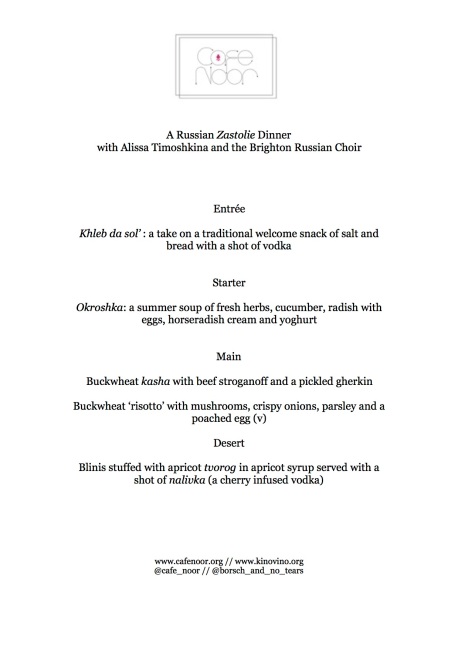 Hleb da sol’: a take on a traditional bread and butter welcome snack

Make dill butter: in a food processor blend butter, salt and fresh dill until a smooth consistency is achieved.
Grill the spring onions: brush with some oil and throw on a griddle pan until scarred and soft. Add some sea salt.
Cut the radishes in thin slices.
Arrange individual ‘sandwiches’ with butter, onions and radishes with a bit of dill to garnish.

Okroshka: a summer soup
with salty yoghurt and horseradish sauce

To serve
Arrange the dry mix of herbs and veggies in plates with a dollop of horseradish, edible flowers, radishes with tops on, pour yoghurt from little milk jars once on the table